When we drive into Tahsis, one of the many beautiful sights on the road when we are almost home, is the President's Tree.   There is some information on a sign at the base of the tree. 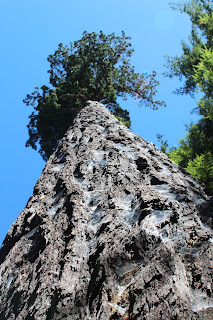 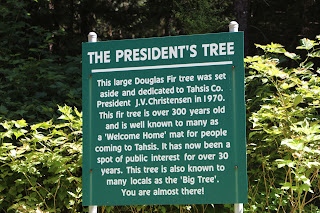 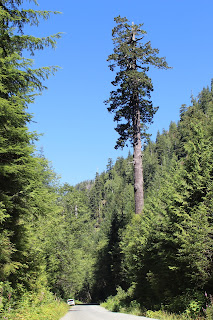 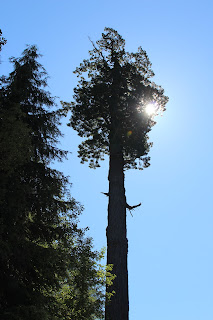 Long time Tahsis resident Frank Collins shared with me some more research that his late wife Lucille had done about the President's Tree.  These are her words:

For years Tahsis was accessible by boat or aircraft only.  Power was supplied from the sawmill boilers.  When the boilers began to fail in the mid sixties an arrangement was made with the Provincial Government to run a hydro line into Tahsis within 1 year (1969 or 1970).

In order to clear the hydro line considerable logging was required and roads had to be located for this purpose.

Ron Todd and Brian White (now professor White from Capilano College, who has done economic development f or Tahsis) located the road from Tahsis to the Gold River system.  They also laid out logging areas of which one contained a large fir tree that was close to the road location.

It was proposed that this tree be preserved for the public to appreciate in future years.

The tree was dedicated to Jack Christiansen who was the President of Tahsis Company at that time and so it became known as "The President's Tree".

The area around the tree was logged by Dennis St. Denise of Gran Bay Logging in 1970.

It has now been a spot of special interest for over 30 years.

Email ThisBlogThis!Share to TwitterShare to FacebookShare to Pinterest
Labels: The President's Tree